My dearest Augusta – You see I have got to Milan

It is mid-October 1816, and Byron and Hobhouse are settled in lodgings in Milan. Their journey from Switzerland to Italy has been remarkably straightforward, since they have crossed the Alps via the Simplon Pass, a feat of engineering created at the command of Napoleon in 1801. Finding the vertiginous Alpine passes too slow and arduous for his armies, he had ordered a road suitable for heavy artillery to be built across the Alps between Switzerland and Italy. The Napoleonic wars having finally ended in 1815, the pass is now open to non-military traffic. 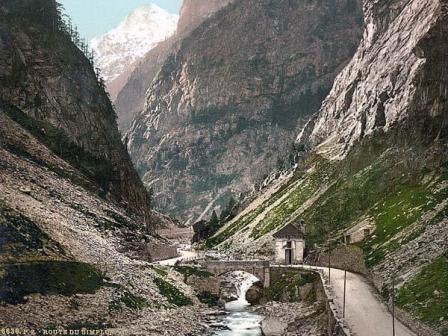 Having heard plenty of horror stories in Switzerland about the terrible bandits who infest the pass, Byron and Hobhouse are well-prepared, with armed guards and an – apparently – savage dog. They are both relieved and (perhaps) a little disappointed that the journey has passed with nothing worse than the coachman stopping to show them the exact spot where English travellers just like them were robbed only the other day.

And so, like the Grand Tourists of former days, the two fall upon Italy with relish, filling their days with sightseeing, trips to the theatre and social calls. They make several visits to the Ambrosian Library, and the ever-precise and orderly Hobhouse expresses his surprise that such a magnificent archive should have no catalogue. The custodian,

… excused this to me by saying, “If there had been a catalogue the French would have pilled [robbed] us of our books as they did of our pictures – they would have known what to take” 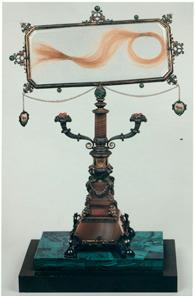 (A telling reminder that a substantial number of paintings in the Louvre originate in Milanese and Venetian collections!)

Catalogue or no, Byron finds something which fascinates him deeply, and manages to fall a little in love. He is delighted by letters between Lucrezia Borgia, by then Duchess of Ferrara, and the Italian cardinal Pietro Bembo, “the prettiest love-letters in the world,” he calls them. And when he is shown a lock of Lucrezia’s hair, still golden after several centuries, he is so moved that:

… I took one single hair of it as a relic… I stick to the Pope’s daughter, and wish myself a cardinal.

← The clouds above me to the white Alps tend A boatman cried out to us, “The Rialto!” →