Autumn – and Byron’s friend John Hobhouse – arrived in Geneva more or less simultaneously, bringing a blast of fresh air to Villa Diodati after many – maybe too many – evenings of ghost stories and metaphysical speculation. 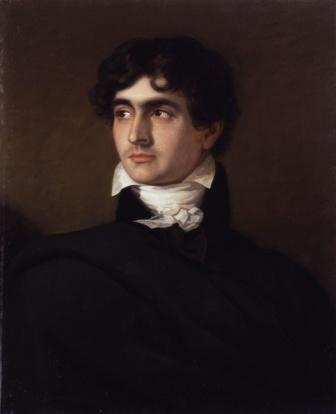 Hobhouse was the sort of Englishman who believed that fresh air and exercise were a panacea for all ills. Having quickly assessed his friend’s mental state as “very low,” he decided that, since both he and Byron were in Switzerland, a walking tour of the Alps was the obvious thing to do: Hobhouse would see the scenery, and Byron would have new sights to see, new things to focus on: he would be, as we English say, “taken out of himself.”

Byron – always at ease in Hobhouse’s company – was happy to agree. But there was one resident of the Villa Diodati whose company Byron didn’t want on the walking tour; whose company, in fact, he never wanted again. That person was his doctor, John Polidori.

Polidori had certainly been more hindrance than help during the time he had spent with Byron. Just two weeks after leaving England he was, according to Byron,

devilish ill – I do not know what with – nor does he.

When the Shelley party arrived in Geneva, Polidori – who despite his medical qualifications was still only twenty years old – developed a crush on Mary, a passion so extreme that he once challenged the friendly and pacific Shelley to a duel. On evenings when Shelley and Byron engaged in philosophical debates he would try to interrupt with flippant remarks and jokes, or insist that two great poets and the author of Frankenstein should listen to him read extracts from his play; a play which Byron described like this:

Dear Doctor, I have read your play,

Purges the eyes and moves the bowels,

With tears, that, in a flux of grief,

Which your catastrophe convulses.

And when, out boating on Lake Geneva, Polidori was given a turn at the oars, he managed to strike Byron’s knee with such force that his employer groaned with discomfort. He saw no reason to apologise, simply remarking,

I am glad to see that you can suffer pain.

No wonder Byron wanted to see the last of him. And, since on a previous occasion when dismissal was threatened Polidori had attempted to take his own life, no wonder that he waited for Hobhouse’s robust English presence before making another attempt, on 16th September 1816.

Fortunately, this time Polidori seems to have realised that his time was up and, pocketing a handsome £70 severance pay, he left the villa.

So it was with a great weight off his mind that, the following day, Byron set out with Hobhouse on his walking tour…