Getting out, Lord Byron met Mary Wollstonecraft Godwin, her sister, and Percy Shelley. 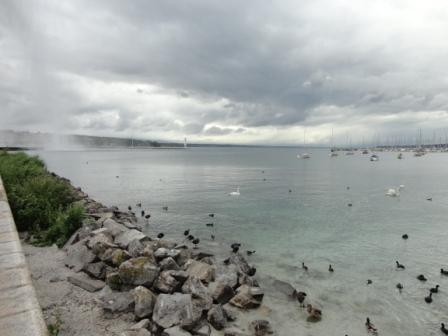 The shore of Lake Geneva.

It is evening, May 27th 1816, and two young men have been rowing on Lake Geneva. As they reach the shore, they meet three other young people: the five are to spend much of the summer together.

Nothing unusual there: young people have always enjoyed each other’s company. These five, however, are pretty special. The two young men in the boat are Lord Byron and his “travelling physician” Doctor John Polidori. The three walking on the shore are Percy Shelley, his partner Mary Wollstonecraft Godwin and her step-sister, Claire Clairmont.

Two of the young people already know each other intimately: Claire and Byron were lovers for a short time in London, in the spring. Now she is effectively stalking him across Europe – he writes to his sister of “a foolish girl who would come after me.”

Byron and Mary have also met briefly in London, and it is interesting that in his journal (quoted at the top of the page) Doctor Polidori mentions her first, using her full name: Mary is only eighteen, but she is the child of famous parents. Her father is the political philosopher William Godwin, her mother – who died ten days after Mary’s birth – was the celebrated feminist Mary Wollstonecraft. Polidori mentions Shelley last, almost as an aside: he is little-known to the reading public in England at this time, but his radical political and religious views makes it more comfortable for him to spend time out of the country.

Byron’s heart no doubt sinks at the sight of Claire, and soon he will be doing all in his power to avoid her company, although he enjoys the company of both Percy and Mary: soon they will be spending a great deal of time together, and the fruits of their friendship will be remarkable…

← This Place of Skulls It was a dark and stormy night... →