This Place of Skulls

And Harold stands upon this place of skulls,
The grave of France, the deadly Waterloo!

May 4th 1816: having left London in style in his Napoleonic carriage Byron continues his melancholy theme of exile and loss with a visit to the battlefield of Waterloo. 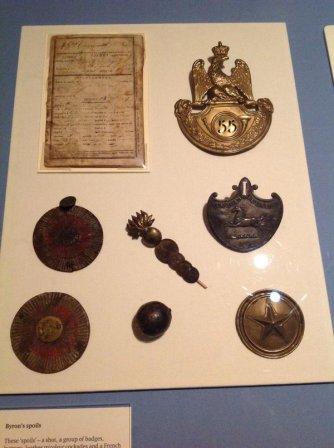 There may well be very little dramatic licence in his description, near the beginning of Childe Harold Canto II of the battlefield as a place of skulls, since it was still less than a year since the battle had been fought. The field was still scattered with broken helmets and swords. Indeed, Byron collected an assortment of cap badges and other memorabilia and sent them to his publisher, John Murray.

He was already in low spirits: the visit to the battlefield made them lower. This was by no means the first time he’d followed in Wellington’s wake – in 1809, during the Peninsular Campaign, he had ridden across the field of Talavera within days of the battle, seeing bodies

… feed the crow on Talavera’s plain

He was certainly no fan of the allies who had sent his hero into final exile, telling John Murray I detest the cause and the victors; and when he came to transfer his thoughts about Waterloo into verse in Childe Harold, his meditations were all for Napoleon – and no doubt himself, brought low and exiled.

Battling with nations, flying from the field;

More than thy meanest soldier taught to yield

← Sear’d in heart, and lone, and blighted Getting Out →